More than 4700 construction jobs are expected to come from recently-approved plans to build the country's tallest tower in Melbourne. The project, valued at $2 billion, received unanimous support from the Victorian Government and the City of Melbourne's Future Melbourne Committee.

The tower is set to be a 'vertical village' at over 365 metres tall, with the State Government hoping to inject an additional $1 billion investment for Melbourne's building industry from the project.

City of Melbourne Lord Mayor Sally Capp indicated that the project was a massive vote of confidence for the city during economic uncertainty in the current COVID-19 crisis. 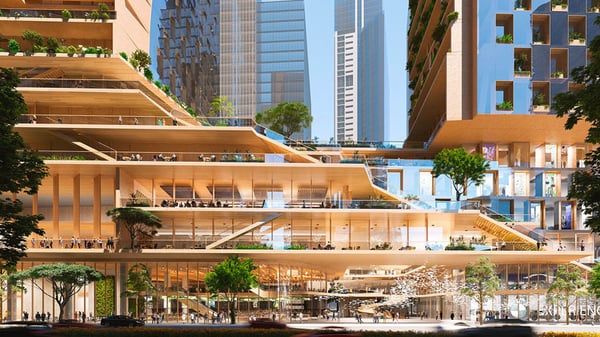 “This will be Australia’s tallest building when completed and the project includes a sky garden that will have some of the best views in Melbourne,” Capp said.

“The rippling style of the building is unique and will be a striking addition to Melbourne’s skyline.”

The project, being led by Melbourne developer Beulah, is poised to create around 3259 new ongoing direct jobs through hospitality, childcare, retail, offices and entertainment. The tower will grow the working population of Southbank by as much as 8 per cent.

Initially lodged in August of 2019, the initial application detailed plans to offer users a connection to nature inside of an urban environment.

“The team behind Beulah are relative newcomers to Melbourne but they have worked to deliver a design that is both elegant and delivers community benefits for Southbank,” Reece said.

“It’s not just about the height – so much thought and effort has gone into the design and the green space. The apartments will provide a high level of amenity for residents along with services such as bike and car parking, a childcare centre, retail, hotel and office space.”

The spine twists into a series of outdoors spaces and green devices along the facades of the two towers to pay homage to Melbourne’s title as The Garden City.

Pocket parks will be a focal point throughout the building, connecting neighbourhoods within the residential tower and aiming to provide residents with a sense of community and a place to relax.

"Our collaborative concept has the ability to truly uncover its potential, improving the urban amenity while seamlessly unifying the suburb with Melbourne’s CBD,” Rowe said.

“The architectural and cultural impact Southbank by Beulah will leave on Melbourne is an exciting prospect and will undoubtedly set a benchmark both locally and globally, both now and well into the future.”

The project will take around five years to complete, with construction commencing in 2021.