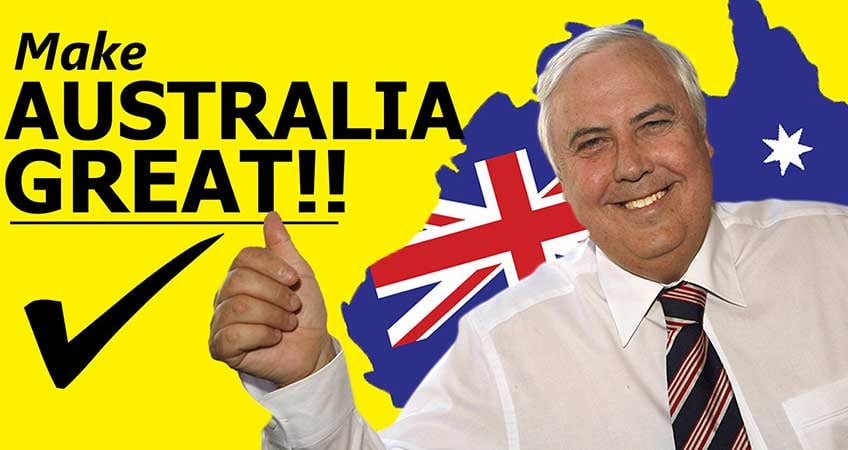 After months of self-advertising with his “Make Australia Great!!” campaign, Clive Palmer is taking matters into his own hands to get the job done, supporting the State’s coal production and creating more jobs for Queenslanders.

The 700 MW coal-fired power station will support the Galilee Coal project, 30km north of Alpha which is also owned by Mr Palmer.

“I am putting my money where my mouth is by announcing this new station so we can power Queensland and help bring down energy costs which continue to escalate,” Mr Palmer said

The move will see around 1,000 jobs during the 3 year construction and development period, with 90 permanent jobs created once the station is up and running.

The in-development Galilee Coal project has a projected 30-year life span, with the first batch of coal to be delivered by mid 2024.

Mr Palmer’s $1.54b project hopes to contribute to the State’s coal production and deliver much needed construction and mining jobs.

“The Galilee Power Station will be developed as a contingent component of the overall project, providing the power needs for the mine operations, coal transportation and port operations, ready for export coal to Gladstone and future power needs for our proposed North Galilee coal mine development.”

It's worth noting that Queensland Premier Annastacia Palaszczuk has withheld support for the plant, stating that "Queensland does not need another coal-fired power station.”

"We have the youngest, most efficient fleet of coal-fired power stations in the nation, we are the energy powerhouse," Premier Palaszczuk said.