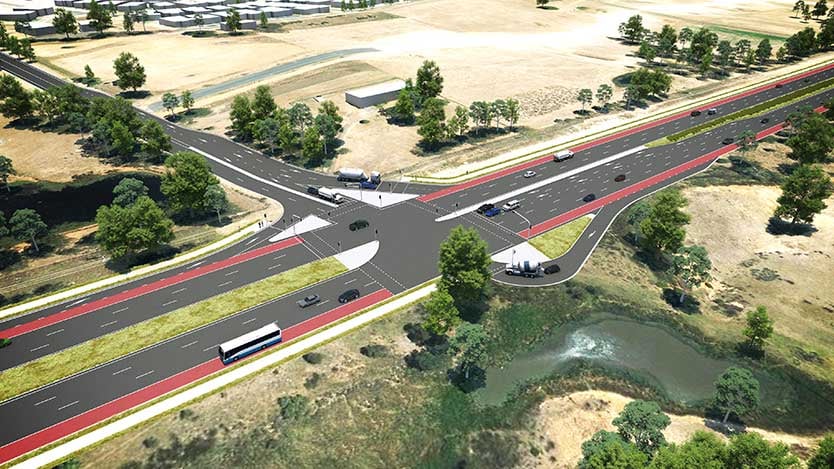 A design of the Northern Road Upgrade

The New South Wales Government has awarded the construction contract for Stage 4 of Western Sydney's $1.6 billion Northern Road upgrade. The contract has been awarded for joint venture between Ertech and Georgiou Group.

Stage 4 of the project involves upgrading The Northern Road between Mersey Road at Bringelly and Eaton Road at Luddenham.

Federal Minister for Urban Infrastructure and Cities Paul Fletcher has spoken about the significance of this project, especially as the $5.3 billion Western Sydney Airport begins to take shape.

“A 5.7-kilometre stretch of The Northern Road will be realigned and new access points to the site of the Western Sydney Airport will be built, ensuring the airport can be completed, as planned, in the mid-2020s,” Mr Fletcher said.

“We want to ensure that Western Sydney can capitalise on the enormous economic benefits that this airport will bring, which is why we are investing $3.6 billion in the Western Sydney Infrastructure Plan to build and upgrade roads around the new airport.”

New South Wales Minister for Roads, Maritime and Freight, Melinda Pavey, has also spoken about the significance of this project.

“The widening of this section of The Northern Road to four lanes, with provision for six lanes in the future, will provide the capacity required to meet increasing demand and deliver more efficient and safer road networks in the area, as the population of western Sydney continues to grow,” Mrs Pavey said.

“The upgrade will also include new ‘bus-priority’ traffic signals at various intersections and shared pedestrian and cyclist pathways on the western side of the road.”

The contract that has been awarded to the Georgiu and Ertech 50:50 JV is worth $120 million.

This is Georgiou's second contract on the project, they also completed work on an earlier stage.

Georgiu executive Robert Monaci has spoken about the project.

“We look forward to partnering with Ertech on this stage and delivering another vital piece of NSW infrastructure to the community,” he said.