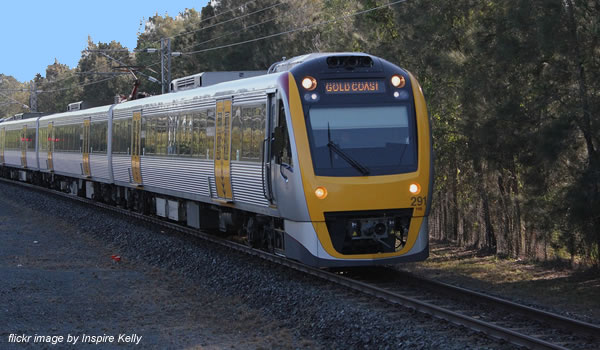 CPB Contractors has been announced as the successful bidder for Stage 2 of the Gold Coast Light Rail project.

The $420 million contract was awarded by the state government to CPB Contractors yesterday evening in a meeting of the Cabinet Budget Review Committee, and publicly announced this morning.

We heard it on the grapevine first, three days ago from one of our 'moles'. A guy called Pete. He always calls me with the lowdown, most of intel I can't publish without ticking someone off in a contracting company and having their Corporate Comms person call me and get angry. So I have to wait til their official announcement (otherwise, I steal their thunder you see. Also, only a fool makes announcements on the behalf of publicly listed companies, especially ones that affect share price).

Work will begin next month, with the goal of having the Gold Coast Light Rail well and truly operational by the 2018 Commonwealth Games. Stage 2 will extend the line from the Gold Coast University Hospital to an interchange at Helensvale, following the Smith Street Motorway and the standard rail line.

Stage 2 of the Gold Coast Light Rail is 7.3km long and will receive $95m worth of funding from the Federal government. $270m will be covered by the QLD government, with the Gold Coast City Council putting up the final $55 million.

CPB Contractors (formerly Leighton Contractors) were chosen ahead of John Holland. One other consortia was invited to tender, GamesLinQ, a Downer EDI and BMD Constructions joint venture. We helped GamesLinQ with some rates on plant and equipment at tender time using a specialist version of iSeekplant we built specifically for BMD (we call it P3).

There were some fears that Premier Palaszczuk would call an early election and possibly endanger the chances of the second stage of the Gold Coast Light Rail going ahead.

Jackie Trad, Deputy Premier, claimed "Stage two will complete the missing link between Brisbane and the Gold Coast and will provide an immediate boost to the construction industry, supporting up to 1000 new construction jobs."

The project is expected to add around $160 million to the QLD GDP and will have significant ongoing effects, particularly during the 2018 Commonwealth Games.

CPB Contractors were chosen due to faith in their ability to complete the project on time, while also providing value for money.

Transport Minister Stirling Hinchcliffe praised the project, saying "Stage two will complete the missing link between Brisbane and the Gold Coast and will provide an immediate boost to the construction industry, supporting up to 1000 new construction jobs."

New projects such as the Gold Coast Light Rail are fundamental to the future of the state. Expanded public transport networks provide important facilities to residents, while construction and operation stages create jobs and spur spending throughout the economy.

The Gold Coast is the sixth largest city in Australia, with a population of more than 546,000. This is expected to explode to 930,000 by 2038. The rail system between the Gold Coast and Brisbane is crucial to easing the load on the Pacific Motorway, which is facing significant congestion issues in the future.

Further down the track, there are an additional two expansions for the Gold Coast Light Rail in the pipeline. These will extend the system 42km from the north part of the Gold Coast all the way down to Coolangatta.